Make an informed choice on the ballot questions this November. Come to the SAFE Environmental Ballot Forum 2014.

Find out why local environmental groups support a NO vote on Question 1 (Gas Tax) and a YES vote on Question 2 (Bottle Bill). Speakers are Sen. Joan Lovely (D-Salem), Phil Sego of Mass Sierra Club-YES on 2, and Andre Leroux of MA Smart Growth Alliance-NO on 1. Hear about the ballot questions and learn how you can join the campaign to help advance our environmental agenda.

The primary is over and the general election looms. This year’s ballot includes several referendums, including Question 2, which gives voters the chance to do what the legislature has refused to do: update the Bottle Bill.

Now that the primary is over, the ballot question battles begin. On Question 2 — the proposal to expand the state’s bottle deposit law to cover water and other unfizzy drinks — you’re going to get hit with the best ads the deep-pocketed beverage industry can buy. So far, they’ve put a whopping $5.4 million into the campaign — more than the casino bigs desperate to stop a repeal of the state’s gambling law. Groups backing an expanded bottle bill (who have raised a meager $145,000 so far) say they expect the industry to pour in at least $5 million more. Hey, money is no object when it comes to protecting their profits.

They won’t tell you that’s what it’s about, though. No, the companies that make bank selling drinks in petroleum-based plastic will try to convince you they’re as green as spring meadows. Pay no attention to the shareholders behind the curtain: Defeating a law that would keep billions upon billions of plastic bottles out of landfills is all about protecting you and Mother Earth, dear vote.

Truth be told, this bottle bill shouldn’t even be on the ballot. A recent Globe poll showed 62 percent of voters favor it. And 209 of the state’s 351 cities and towns have passed resolutions supporting it. On Beacon Hill, it has been supported by at least a hundred legislators, and the governor. The Senate has approved it. But time and again, House speakers have refused to allow it to the floor for a vote, fearing the wrath of the voters who might think it’s too much like a tax. It’s hard to recall another case where the will of so many people was thwarted so utterly, for so long. Read more.

If you’ve driven by the Salem power plant of late,  you will have noticed some big changes. No coal pile! And the oil tanks are coming down (see photos below from Marilyn Humphries).

Recently a challenge before the EPA was denied, so Footprint Power is now moving ahead to finalize financing and begin demolition of the old plant. In addition, Footprint and the City are finalizing a Community Benefits Agreement. 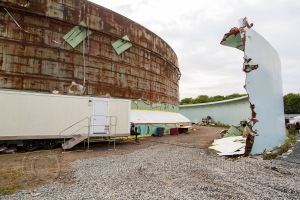 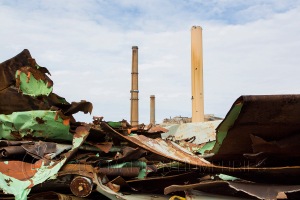 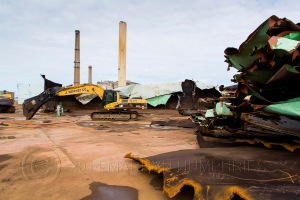 Are you or your neighbors considering keeping chickens? Have you considered beekeeping to help support urban agriculture?

The City Council will be accepting comments from the public as it considers an urban agriculture ordinance. Come show your support for an ordinance that supports our local food economy.

Professor Steve Young from Salem State University’s geography department will present his research on the vulnerability of Salem to sea-level rise in the face of climate change. In addition, Salem SAFE co-chair Jeff Barz-Snell, an environmental researcher, will place Young’s research in the context of the latest reports from the National Ocean and Atmospheric Administration (NOAA). Finally, Kathy Winn from the Salem planning department will bring us up to date on recommendations made by a consulting group to protect Salem as the waters rise. This event is free and open to the public.