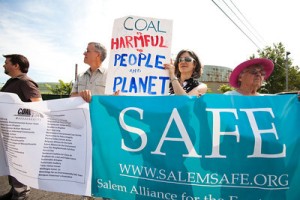 SAFE, Healthlink, Clean Water Action, and Sierra Club held a press conference at the Blaney Street pier today to announce the launch of a statewide campaign to decommission all of the state’s coal-fired energy plants. Today, Massachusetts has three coal-fired plants: Salem Harbor Station, which will be retired in June 2014; Mt. Tom in Holyoke; and Brayton Point in Somerset. Brayton Point, which is owned by Dominion Energy, is by far the state’s largest operating coal plant.

Among those who spoke at the press event was Kathy Karch, a Willows resident and high school biology teacher. Karch said, “If we are going to get global climate change under control, and we are going to guarantee a livable future for all children, then among other things coal needs to go and it needs to go now. Tomorow is too late.”

Coal plants are the largest polluters in the Commonwealth, and contribute 25 percent of the state’s greenhouse gas emissions. Read more.